Bihar Colony, a Katchi neighbourhood in Lyari, is a war zone. Here, houses are sprayed with bullet holes, Some even have 8-inch rocket grenade hole.

Hajra Bibi, 72, thinks the kids have gone mad. She is just back from a refugee camp in Badin. Her house is in tatters. 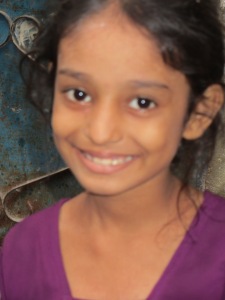 For Sabira, 9, boarding a bus to a camp in Badin was little short of an adventure. “Badin was so cool. We would play all day under the open sky,” she giggles.

A young boys, who says, “Halaat kharab hain. When they get better I will go back to school.”

A glimpse at the neighbourhood, which comprises of several thin winding lanes.

Police guards the neighbourhood. Yet residents claim they disappear when the gangsters arrive and shoot them down. 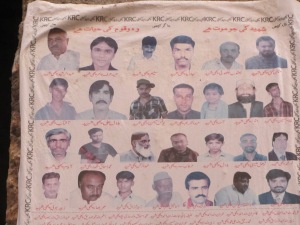 A bunch of kids who wanted their picture taken.

For the Kutchhi Memons, the jamaat khana is as sacred as a mosque. In sickness to fitness and for weddings to funerals till settling domestic disputes, they have always looked toward the community centres.

So when the Lyari-based People’s Aman Committee tried to take up the role these centres had been serving for years, disputes erupted between the Kutchhi and Baloch communities living together for ages in the oldest neighbourhood of Karachi.

Bihar Colony, a Kutchhi community stronghold in Lyari, is a maze of thin winding lanes. The dusty walkways are occupied by shops and kiosks. Stray dogs rest by open sewers. You push shoulders with passers-by as you walk. The clatter makes you talk a notch louder to get heard.

A few lanes down the road, near the Mandhra Mohalla, the public starts thinning out. There are no shops and the houses are deserted.

The walls alongside the roads bear bullet holes. A house has an eight-inch hole made by a rocket. The people here have already migrated to safer places.

Soon we arrive at a building, where an ambulance is parked. A plaque reads “Soomro Jamaat Khana – 1957”. Inside, a clean, tiled room with eight chairs neatly lined against the wall bears resemblance to the waiting area at a doctor’s clinic.

“It is here we settle all our disputes. Here we get married. This is our community hall,” explains Shah Abdul Hai, a representative of the Kutchhi Rabita Committee.

Such is life in Lyari, an area infested by gangsters, but ignored mainly due to the political patronage they receive. The fault lines are clearly marked and leaders from one group dare not enter the rival’s territory.

Right now many are serving as sanctuaries for the people displaced from their homes by attacks from rival gangsters, who, many people allege, belong to the People’s Aman Committee.

“About five years ago, the Aman committee people began opening their offices in the Kutchhi areas,” recalls Sultan Kutchhi, another office-bearer of the Kutchhi Rabita Committee. “They said it was to help resolve disputes. Our community was furious as our centres were already there to resolve disputes.”

Gangs have existed in Lyari for as long as its residents can remember. But before 2008, they were small and their influence not that significant.

In the same year, Abdul Rehman Baloch alias Rehman Dakait, an influential gangster now dead, brought together several of these small-time gangs, which all swore allegiance to him under the banner of People’s Aman Committee. Collectively, they began spreading their network.

Residents of Bihar Colony recall how armed men tried to enter their community halls. “They would patrol our lanes in the night. We were scared for the safety of our women,” an old man said.

“We had all the reason to feel irritated,” said an elderly man, Haji Hasan Ali. “How would you feel if an outsider steps into your house and says he will decide what happens in your house from now on?”

“How would [President Asif Ali] Zardari feel if matters of his clan were decided by an outsider,” interjected Hajra Bibi, a woman in her 70s.

Faiza Ali, another Kutchhi woman, termed the community centres just like their home. “You see disputes are either settled in the court or within the house; we choose the latter option.”

Elahi Bux, a representative of the Aman committee-funded Lyari Resource Centre, which works for health and education, rejects the claim outright. “Your words come as a surprise to me,” he said. “I have lived and grown up in the area, and the Aman committee has never resorted to such activities.”

“The Kutchhis and Baloch have always lived in peace,” Bux maintained. “It is the gangs outside Lyari that are trying to infiltrate and bring it under their control.”