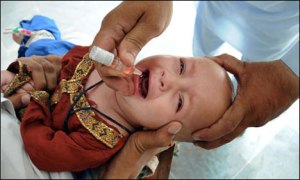 a baby being administered the life saving anti-polio drop

In Manghopir, the health centre is heavily guarded. A Rangers mobile stands at the gate. Uniformed soldiers stand in position; their overused AK-47s pointing at the main road ahead.

For the past few months, the centre has been used for two more purposes: a Rangers’ headquarters; and the residence of Farzana Baloch – a vocal woman who has been a part of local vaccination campaigns for the past 17 years. She heads a union council in Manghopir, a Taliban hotbed now.

In what was originally a simple job to provide healthcare at every doorstep, she and her family of six has been forced to leave her home and seek refuge in a few rooms at the centre, under the hawk-eyed guard of the paramilitary soldiers.

After reports emerge that the American intelligence agency used a fake hepatitis vaccination campaign to hunt down the Al-Qaeda chief, polio vaccination drive in Pakistan has suffered a major setback in Pakhtun-dominated localities.

Manghopir’s Sultanabad is no different.

“After the Mehsud Taliban took over entire neighbourhoods, it has been next to impossible for us to vaccinate the children against polio,” says Baloch, sitting in her sparsely furnished office at the health centre. “When we go to their houses, they invite us in for a cup of tea, and state that they just can’t get their children vaccinated against the polio virus.”

“Many of these families come to the centre later to get their children vaccinated against hepatitis and malaria, which are not part of the government’s door-to-door service, but take special care that the polio vaccine is not administered to them.”

The reason is propaganda from the pulpit and the pamphlets distributed, terming the polio vaccine a ploy by the West to render the Muslim world infertile.

“Why is the vaccination drive conducted only in Muslim countries?” are some of the questions Baloch has to answer frequently.

But recently there have been cases where mothers have quietly given anti-polio drops to their children when their husbands are not at home.

“The change has come through repeated advertisements run on the state television,” Baloch believes. “These Pakhtun families do not get cable television but rely on the good, old PTV for news and entertainment.”

She remembers how after Shakeel Afridi, the doctor who staged the CIA’s vaccination drive, was arrested by the law enforcers posters of Shahid Afridi, the famous cricketer working as a goodwill ambassador for international aid agencies, had to be torn off from the centre. “Both of them were ‘Afridis‘, and we were scared of a possible backlash,” says Baloch.

She has seen the worst days in the profession—days when she did not know if she would get home alive.

“Last year, young men from the Mehsud Taliban faction would sit in a neat row just outside my office. They never said anything but their presence was intimidating,” she said. “I asked all my workers not to talk to them, or confront them.”

There were times when she received threatening phone calls. “Stop what you are doing” the callers would say.

But she is happy with the change in her residence. “It’s safe here. And now my workers go in the field with the Rangers and police officials. They are not scared for their lives.”

“But when we enter a neighbourhood with the law enforcers, locals eye us with suspicion. They feel that we act as their spies.”

They have reason to do so. Often as soon as polio campaigns end, the paramilitary force launches a search operation. They pick up young boys and take them away for interrogation.

“For instance after we ended a campaign on July 5, the paramilitary conducted an operation the very next day,” says Baloch.

With the military operation in full swing in North Waziristan, she admits families of internally displaced persons, who have never been vaccinated, have begun arriving. This might mean added work for Baloch and her team.

“Sometimes I feel the vaccination drive is a never-ending hole which keeps on getting deeper. The polio vaccine is just an excuse. The actual fight is between the state and the people, who have taken up arms against it. Whenever the state decides the right way to tackle with this faction, polio would automatically become history.”

*her picture has not been published for security reasons