Karachi
It started with a single room school just after partition. Today the Nasra School is spread over five large campuses with 20,000 students. Yet its founder, 92 year old Nasra Wazir Ali, lives in a single bedroom apartment inside the education institute she cultivated with such joy and perseverance. 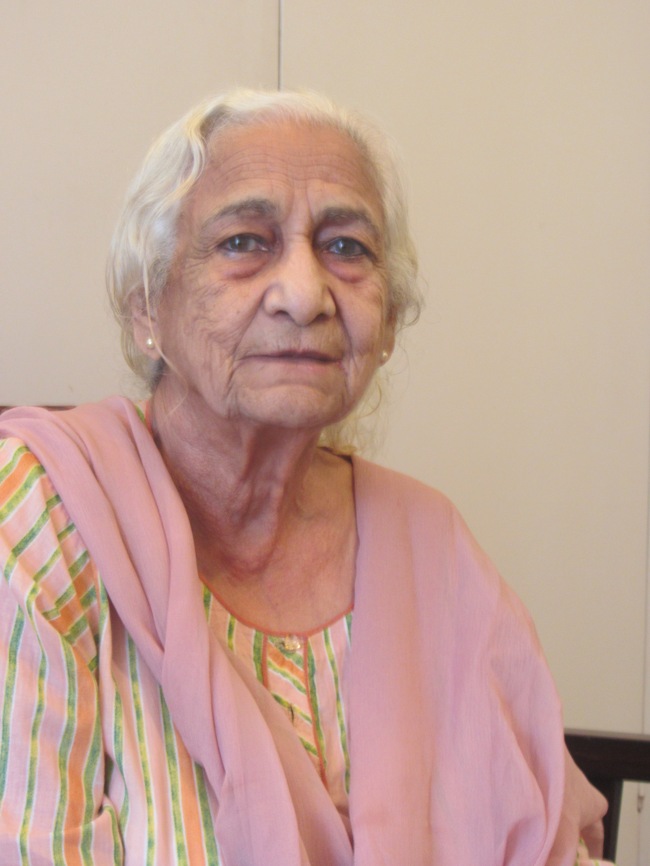 Dressed in a printed shalwar kameez, she sits in an L-shaped room which serves as a dining room for her meals and a drawing room to greet visitors. The walls are filled with frames; there is one where she is accepting an award from former president Asif Zardari, another showcases the Sitar-e-Imtiaz she received for her services. One corner of the room is full of pictures of her family, her husband, daughter and son, and her numerous grandchildren and great grandchildren. The only window of the room opens to the vast grounds of the school building. When she is bored, she likes to look down and watch the children playing, squealing, running, laughing.“My husband was a civil servant. In 1947, when Pakistan happened we were shifted to a government accommodation situated at Karachi’s Bandar Road,” said Nasra, as she begins the story which led to the school that eventually became the mission to her life.“I felt the need for a school which would educate middle class parents, many of who were government servants who lived in the locality. I emptied out a room in my house, added chairs, tables and a blackboard and began teaching whoever would attend class.”

Her first student became her own daughter, Shahnaz Wazir Ali who grew up to become a prominent bureaucrat. The school became such a success that one by one the family had to empty out all the rooms of their house and convert it into class-rooms. Nasra, her husband and Shahnaz had to move out into the garage.
But as students increased the government began to have a problem. “They said this was a government property meant for residence and could not be used for a school.”So the search for a new place to relocate the school began. They initially found a few rooms near Empress Market where the school was re-located. “I never waited for anything big to come by. I tried to give my best with whatever resources I had.”Things changed when her husband bought a huge piece of land at Garden East, which was to serve as their private residence. But Nasra converted it into the first purpose built building the school owned, leaving out a small apartment for her private residence, where she lives to this day.

Interestingly her husband supported her decision. “He was always very supportive of my work. Caring, responsible and sensitive.”
They had never met before they got married. “I saw him for the first time on the day of my marriage. We eventually fell in love.”As strength of students in the school multiplied her brother, a lawyer by profession, registered the school under an act. A board of governors was formed. “The school is owned by a trust. It is not an individual property anymore.”With tuition fee from students, enough was saved to expand the institute to four more campuses across the city; in Malir, Super Highway, North Karachi and Korangi. Fee in the school was always nominal. To this day it ranges between Rs800 to Rs1700 depending on which campus a child gets admission at. It has all the facilities a modern school needs; vast grounds, sports activities, computer labs, libraries and qualified teachers. Students regularly bag top positions in the Board of Secondary Education and Aga Khan University Examination Board.
Perhaps, its expansion while maintaining affordable fee structure is a slap on the face for newly established elite private schools, where schools are run like commercial enterprises, where each student is a client who brings enormous profit, digging holes in pockets of salaried professionals who have accepted the fact quality education comes at a hefty price.

Nasra, cannot hear anymore. She suffered a stroke last year. Her memory sometimes fails her. But her spirits are still high. She spends her time teaching English to her two maids. When she is not doing that she reads poetry. Inspiring poets like Khalil Gibran.

“Your children are not your children.
They are the sons and daughters of Life’s longing for itself.
They come through you but not from you,
And though they are with you yet they belong not to you
You may give them your love but not your thoughts
For they have their own thoughts
You may house their bodies but not their souls
For their souls dwell in the house of tomorrow
Which you cannot visit, not even in your dreams.
You may strive to be like them, but seek not to make them like you
For life goes not backward nor tarries with yesterday,” she reads out from a collection of poems, and quotations she keeps stacked in a plastic folder at her table.

When her teachers come to visit her she tells them she is getting old and tired. “But they tell me they love me, they need me, the school needs me. That and only that, is what keeps me going. Every day.”