A crocodile grunts. There are 200 of them. And just when I think they won’t move, they twist their tails precariously, bask in the sun and open their jaws wide apart.

Despite that, my guide insists they are man-lovers. Legend is, he says, that once a child fell into their swamp. The leader of the pack, which he calls the Mor Sahib, carried the child on its snout, and left him ashore. They never hurt him.

At the 700 old shrine of Mangopir, the crocodile pond is a major attraction. Myth is, that lice from a Sufi saint fell into the pond, and then it grew into a crocodile. For years, followers of the Sufi saint, offer these crocodiles meat, and also badami halwa. Some are thrown rose petals at.

I pose by the crocodile, with my back at the gentle beast. I’m very scared. I get visions of the crocodile opening its jaw apart and taking me in. The picture clicks, I get up and say a silent prayer.

Amid security concerns visitors to the shrine have reduced considerably. And so the crocodiles are starving. Even so, they are breeding well. And the small swamp is over crowded. The crocodiles do not have much space to move.

Crocodiles lay eggs, they bury them in the sand around the swamp. And a baby crocodile is as big as tiny house gecko, my guide tells. With time they grow into these giant nine-foot long creatures.

Mangopir, as the name of the area goes, is a run-down locality at the Northern end of Karachi. A hilly area, it is breathtakingly beautiful in the early morning. The hills store marble, the ones you use on your floors, and the area is surrounded by marble quarries. Trucks pass by carrying huge marble slabs. I’m scared a slab will fall on my car and crush me as I ride past.

Next we move to the hot water springs. There are separate entrances for men and women, but as no one is around I am allowed to enter the men’s area. I enter a stone walled room, with water entering from one side, and leaving from the other. The walls are algae laden, and steam blows out.

a woman guards the entrance to the hot water spring. The inscription over the gate says, “beneficial for every ailment. do not enter without a ticket.”

I touch the water. Its warm. I drink some. And splash some on my face. It’s refreshing.

Next we reach the shrine. There is no security. No metal detectors. No police. No paramilitary. And the Taliban are present in the area. It’s a known fact. They’ve asked the locals to close down the shrine, but for now they’ve just decided to not give a shit. 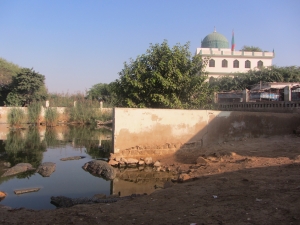 I take of my shoes, and am taken up a flight of white marble stairs. It leads to a huge hall where the saint rests in peace. The grave is covered with a rich green mantle. In Arabic, in gold, are few inscriptions. I read Ali and Hussain.

My guide insists I pray first. I’m uncomfortable, mainly because I don’t know what to do. I was raised by a family which discourages visiting shrines. But I don’t want to hurt my guide. Help me through this, I whisper to a friend who’s accompanying me.

Do what I do, he says. He enters the hall, sits by the grave, and raises his hand in prayers. I follow suit. I recite a few verses from the Quran I remember, and pray that the saint rests in peace. Next he kisses the grave. Gets up to leave. I get up too, and turn towards the entrance. Do not turn your back at the saint, he hisses. Quickly I change my position so that now I am facing the grave. We walk backwards to the entrance.

We move up a flight of stairs. Now I am at level with the green dome of the shrine. I look down. I can see the whole city. At least the North of it. I am surrounded by hills and date trees. I can see the crocodiles. And the hot water springs.

the view from the top

My guide orders green tea. We sit underneath a 500 year old maple tree and sip it. The tree is hollow from inside. These trees catch fire and explode after a hundred or two hundred years. The trunk becomes hollow. The hole is big enough for a grown person to stand inside. But it keeps growing.

There is a lepers colony at Mangopir. Back in the days when the British ruled the country, or even before that, lepers flocked to the hot water springs which were thought to cure the illness. Back in those days leprosy was considered contagious. So when a person caught the illness he was banished from his family and community. Hence the Urdu curse, Allah tumhay kooray lagay, God give you leprosy.

When a British officer visited Mangopir, and saw all these lepers camped around the springs, he constructed a hospital for them in the 1860. The hospital still remains. 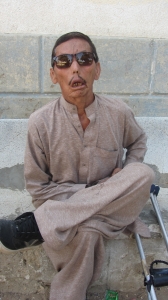 a patient under treatment for the past 20 years. He runs a shop in the area, and lives with his wife and children

The lepers get treatment there. Many of them have now opened up their shops in the colony. Some of them are in wheel chairs, others in crutches. Some can not see, and so wear dark glasses. Some have a nose missing, some have a mouth twisted to one side.

But they live normal lives. They have wives and children. They engage in business. Being handicapped is the only problem I have, otherwise I am good, as one leper put it.

One thought on “At the shrine of the man-loving crocodiles”