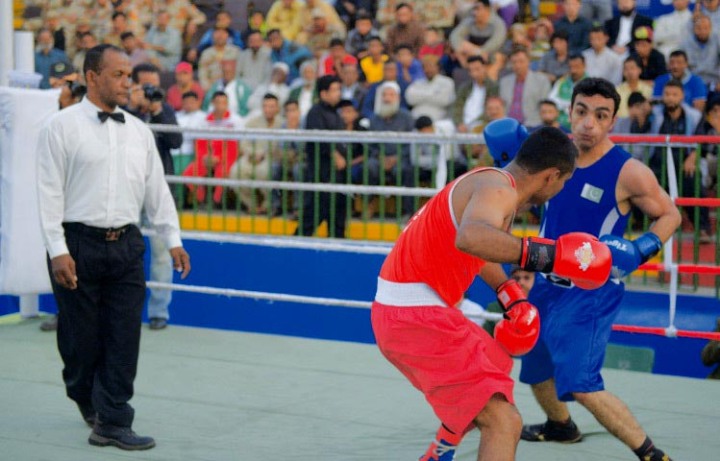 There was a time, not long ago, when Lyari’s Mauripur Road would descent into silence after sunset, a silence that was only pierced by echoes of gunshots. Not anymore. For now, at least, the violent neighbourhood has abandoned street violence, and its youth are caught in a different kind of a battle — fought in a ring with boxing gloves on.

These days, Mauripur Road is a traffic warden’s nightmare, as giant trawlers to and from the Karachi port lazily move along the thoroughfare and fumes emanating from these diesel trucks choke the pedestrians and motorbike riders alike. Standing out in this chaos of ceaseless horns and headlights from vehicles stuck in the jam is Lyari Peoples Stadium — blazing with bright, multi-coloured, fancy lights.

A huge picture of British-Pakistani boxer Amir Khan dominates the entrance to the stadium. Pakistan Rangers — who have just cleared Lyari of itS gangs and helped establish some semblance of order in the lawless neighbourhood — is organising a boxing tournament, and the people are jubilant.

The Amir Khan Boxing Tournament, held from December 13 to 21, 2015 invited 16 teams from all over Pakistan. The winning team received a medal from the champion himself who visited Lyari for the final match.

Lyari has given Pakistan some of the best boxers, including Hussain Shah, who brought home the bronze medal in the 1988 Olympics.

Inside the Peoples Stadium the stage is all set. A young boxer in a gold embossed cloak enters the ring, as he waves his arms at the audience he imitates the world-class boxers he has seen on tv, and in response, the crowd roars with joy.

It is Team Red against Team Blue.

The crowd is all men. They back their teams with cheers in Balochi. They clearly haven’t had so much fun in a long time. Even the Rangers personnel crack up laughing with their rifles slung on their left arm.

“Boxing runs in the blood of Lyariites,” says Aqib Baloch, who is here to watch the match.

A statement released by the Rangers said, the tournament aims to promote a positive image of Lyari. It is part of the second phase of the operation where 2000 young Lyariites will be provided employment opportunities in the private sector and Sindh Rangers department.

He is right. Despite being notorious for gang wars, drugs and criminals, like Uzair Baloch, Lyari has had its share of aspiring boxers. Over 16 boxing clubs in the locality are training young boxers in the sport.

But over the years, the sport has somewhat lost its favour to more popular games, like cricket and hockey, and the government departments that patronised boxing teams have wrapped up their sports quota. The disappointed Lyari boxers that once starved for glory have resorted to drugs and gang wars.

Take Malang Baloch, a boxer who represented Pakistan in the 1972 Olympics. He would have been a national hero had he been a cricketer. But the old boxer lives in poverty and worries about making ends meets. His love for the sport is still alive and hopes that matches like these will help nurture young talent in Lyari. “There is peace in Lyari now. And a boxing tournament is taking place in the city after four long years.”

Nawab Ali, a boxing coach, claims that tournaments like these are a step in the right direction. “Talent hunts like these will revive interest in the sport. Very soon the government departments will relaunch boxing teams and our boys will get employment.”

Abid Hussain Brohi, Vice President Sindh Boxing Association, says: “Sports is the only way to bring peace back in Lyari”.

Elahi Bux, member of the Strengthening Participatory Organisation, a not-for-profit organisation, says: “The tournament has been organised by the Rangers which has been involved in scores of extrajudicial killings in the area. But to be honest this is not a bad initative”.

He adds, “Boxing has always been a poor man’s game. In Lyari it has always been a way for the unemployed youth to get a job on the sports quota with a government department. If such tournaments become a regular practice boxing might receive the boost it needs”.

A statement released by the Rangers said, the tournament aims to promote a positive image of Lyari. It is part of the second phase of the operation where 2000 young Lyariites will be provided employment opportunities in the private sector and Sindh Rangers department.

In the closing ceremony boxer Amir Khan reiterated his promise of establishing a boxing academy to nurture young talent in Lyari.

“I’m glad I’m in Lyari,” he said. “I’ll make the academy for all the boxers here. I have a fight in March and I hope everyone in Pakistan watches it. I’ll come back to Lyari after the fight.”